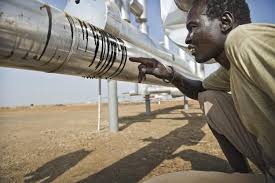 South Sudan must have been waiting with bated breath or should we say eavesdropping on the conversations between Kenya, Rwanda and Uganda that have been the centre of media attention this week. The President of Uganda, Yoweri Kaguta Museveni has been hosting his colleagues Uhuru Kenyatta, the Kenyan President and Paul Kagame, the President of Rwanda in a series of meetings that have resulted into developments likely to lead East Africa and hopefully its oil and gas sector to new economic frontiers.

When three Heads of Government in an oil- rich region meet, oil is expected to dot their talk which in itself is a satisfactory reason for South Sudan to be interested. Uganda has oil, South Sudan has more oil and Kenya has some oil as well. They all have oil.

But the three nations had in the past failed to agree on a single regional pipeline project, the construction of that pipeline that will end up at Port Lamu. At first glance it may seem like South Sudan and Kenya do not need Uganda’s participation in the pipeline project given that South Sudan neighbors Kenya in the North and the project can go without first having to pull strings with an obstinate neighbor down in the South.  But for the newest nation in the world it is only prudent that they keep the costs of such a massive project to a bare minimum. And that is where Uganda comes in handy.

Besides the oil companies within the region believe that a joint pipeline project would be cost effective for them since the influence of some like Tullow Oil Plc straddles across the region. Tullow now operating in Kenya and Uganda would be comfortable funding such a project. In economic terms, Tullow benefits from the joint project because of the inherent risk diversification. The investment risk of the whole project is less taunting for the company when it is spread across many countries.

Unlike South Sudan, Uganda is simply taking on the project as a more practical option. In fact for Uganda, the pipeline is like a side dish that Uganda will go to bed with but well aware its true love waits at home- the 60,000 barrel per day Capacity refinery.  Or at least that is the subtle message that Museveni sent when he bashed the pipeline project saying that he had only agreed to it because of the investors and insisting on Uganda building an oil refinery no matter the cost. In other words if only Tullow Oil, China National Offshore Oil Company and Total can see things through Museveni’s eyes, then well, Uganda can do without that hell of a pipeline.

Kenya on the other hand is only an economic strategist in all this, knowing well the economic benefits that it will reap from the joint project. Kenya has also experimented with an Oil Refinery before which has turned out to be a huge disappointment. There were reports earlier that the refinery would be closed by the end of the year but the latest reports indicate that Kenya will still keep its refinery. But even then, the refinery has not always been a reliable investment and the leaders must be thinking it is time they placed their eggs elsewhere which is the justification for supporting this pipeline project.

Yet for South Sudan, this project is all they need to assert their independence from their neighbors in the north from whom they seceded, a couple of years ago. Whilst South Sudan inherited 75% of the 470, 000 per day million barrels of the oil available when it seceded; Sudan remained with the necessary infrastructure that South Sudan needs to gain commercial value from the oil. Sudan has the pipelines, the refinery and Port Sudan, the major port through which the oil is being exported. So South Sudan becomes the proverbial weakling that catches a cold every time Sudan coughs. Add to that, the fact that South Sudan is a budding economy, highly dependent on the resource and you will understand why the year-long impasse that froze the oil flow to the north has left Salva Kiir’s South Sudan more bruised the Khartoum Government. The Juba government is more dependent on the oil than Sudan.

Therefore, for the future, Sudan is justified to find it safer to build another oil outlet to curtail its over- dependency on the pipelines that run to the north. If it can have an alternative, then, well in the future they will not be bullied around by the demands of Sudan. That is what South Sudan is aiming for in all this.