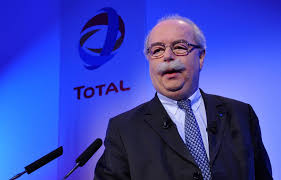 Christophe de Margerie, CEO of French oil giant Total was killed Monday night when the business jet he was flying in crashed upon takeoff at Vnukovo Airport in Moscow. In addition to De Margerie, 63, four others perished in the accident, including three crew members and the driver of a snow removal machine with which the Falcon 50 jet collided.

According to reports, the plane’s landing gear hit the snow plow on liftoff, causing an engine fire. As the pilot attempted to turn back and land, the plane crashed in a fireball.

Total has confirmed the accident in a statement.

De Margerie was tireless in grabbing new oil and gas opportunities for Total — while they were still available. De Margerie ventured out from Total’s headquarters in La Défense, the west Paris business district, to woo a who’s who of presidents, prime ministers, strongmen and dictators in places like Iraq, Iran, Uganda, Equatorial Guinea, Yemen, Angola and Burma. Read more here