Tanzanian President John Magufuli on Thursday called for a speedy execution of the 1,445-kilometer East African Crude Oil Pipeline (EACOP) project running from Hoima, in mid-western Uganda to Tanzania’s Indian Ocean port of Tanga.  Addressing a public rally in Ruzingwa Village in Uganda, Magufuli asked investors to explore the possibility of lowering the set 2020 deadline to 2019.

“We need the project now because the early it is implemented, the early will investors and the countries start generating money,” he said flanked by President Yoweri Museveni during his first of the three-day state visit in the country.

ALSO READ: Justice Ogoola warns government against excluding communities during the construction of the oil pipeline

“Why should we wait for the proposed competition date of 2020 and yet you the investors have the money? The experts are here. You can hire as many contractors as possible and give each of them a section of the pipeline to construct or ensure you have both day and night shifts. After all you know that when we start pumping the oil you will get back your investment and returns,” Magufuli said.

He also commended Mr Museveni for agreeing to the pipeline – which was being eyed by some East African region, to traverse Tanzania. Upon completion, it will have a capacity of transporting 216,000 barrels of crude oil daily, thereby boosting the economies of the two countries as well as creating many job opportunities.

Museveni used the event to urge Ugandans to make sure that they prepare to benefit and earn from the project . 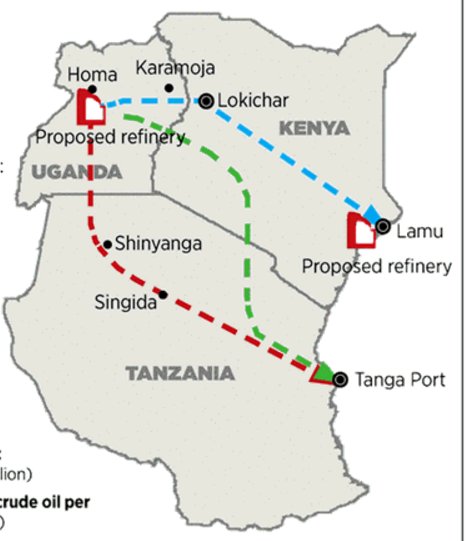 “We have brought wealth to you. The pipeline is going to cost US$3.5 billion, which is a lot of money but make sure that you earn from it. If you have a hotel, those who work on the pipeline will lodge in it; if you have food in the garden, you can sell it to these workers and if you have a car for hire, you can use it,” said Museveni.

Later, the two Heads of State officiated a groundbreaking ceremony at Luzinga village in Mutukula to lay a foundation stone to symbolise the commencement of the proposed project.

The first foundation stone for the US dollars 3.5 billion project was laid by the two Heads of State in Chongoleani, Tanga Region in Tanzania on August 5, 2017.

Magufuli and his Ugandan counterpart, Yoweri Museveni later commissioned the one stop border post  (OSBP) at Mutukula. The OSBP will bring together immigration and customs officials from the two neighboring countries under one roof at the border crossing point, eliminating double clearance of trucks and persons on both sides of the border.

TradeMark East Africa, with funding from UK’s Department for International Development (DFID) and Global Affairs Canada, has funded the construction and operationalisation of the Mutukula OSBP.

Speaking at Mutukula, Museveni asked security personnel at the border to allow members of the community surrounding the border from both sides to cross over the border to attend various ceremonies and even greeting their relatives.

“By stopping these people from seeing their friends and relatives is a total misuse of the border, so I ask security officials to allow members of the community to cross over without passports,’’ he said.

RELATED:  Uganda and Equatorial Guinea agree on action for the development of the oil and gas industry